It was Surfer Boy's 40th birthday during the week and tonight we are taking 40 family and  friends to see his favourite movie.  It may come as a surprise but his favourite film is the 1956 musical -
HIGH SOCIETY.
Not the movie anyone was expecting - except his family who are responsible for him knowing every word and song.  Coming from a family with 4 sisters he was bound to be influenced and I for one am rapt that we are seeing this and not his second favourite film - PLATOON. 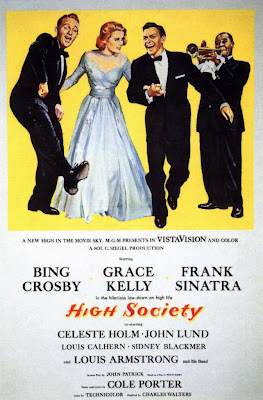 C.K. Dexter-Haven, a successful popular jazz musician, lives in a mansion near his ex-wife's Tracy Lord's family estate. She is on the verge of marrying a man blander and safer than Dex, who tries to win Tracy's heart again. Mike Connor, an undercover tabloid reporter, also falls for Tracy while covering the nuptials for Spy magazine. Tracy must choose between the three men as she discovers that "safe" can mean "deadly dull" when it comes to husbands and life.(IMDB)

I hope you have the bestest time ever!! Look forward to seeing photos of Surfer boy singing!!

Love it! He is a man of many layers your Husband.
Happy birthday James.