I am convinced that this may be the greatest invention of modern times, perhaps even for ever!
As soon as I heard about it I registered online so that I wouldn't miss out on this FABULOUS world changing invention. It has now been released and all I have to do now is sit tight and wait for it to turn up in my letter box! 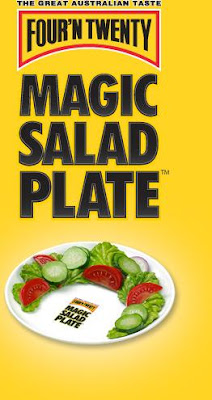 This is the Blurb on the website - I LOVE IT!!!
Research has practically proven that salad can’t fill the seriously hungry stomach. So why waste time trying? Simply place your delicious Four’N Twenty pie in the area provided on the Four’N Twenty MAGIC SALAD PLATE™ and suddenly with no effort at all it looks like you’re having salad as well! With a Four’N Twenty MAGIC SALAD PLATE™, to the untrained eye it appears there’s a leafy green salad, but in truth it’s just part of the plate. Astounding! Now you don’t need to cave in to the pressure that some people put on you to eat salad. And all while still looking like you totally have!
Posted by JK at 6:03 pm 2 comments:

A few people have asked about book group discussion questions and as I don't know how else to share them I have had to post them here - sorry to those of you who haven't read the book. Hopefully there are no spoilers for anyone wanting to read it.
I have borrowed a few questions from fan forums and I thank those people, whoever you are.

Were you able to suspend disbelief? Did you think SM created a real and believable story?

Did you find the characters engaging and did they ring true?

Did you have a real sense of Bella experiencing a typical first love even though there was nothing typical about her or her first love. Did you think Bella's reactions were realistic?

Did you feel the tension as Edward was learning to control his hunger?

Who was your favourite secondary character and why?

Meyer says that the concept of "choice" is an important one to her. How does the book illustrate that concept?

Do you think that Bella is a strong or a weak woman? Is she a good role model for young women? How does she fit with your view of feminism?

What about Edward as a role model for young men?

Which character (main or secondary) do you relate to most? Why?

What was your first impression of Twilight? Did you think that it was a good introduction to the series? Why or why not?

What was your first impression of Edward and the Cullens?

What if the main roles were reversed? Do you think the story would have been similar if Bella was the vampire?

Why is it that Bella's blood calls to Edward more than anyone else?

Why does Bella accept that fact that Edward is a vampire so quickly?

What are your opinions about Bella & Edward's relationship, and why?

Do you think that the fact Bella had to take care of her Mother, and to an extent, Charlie, attracted her to the strength in Edward – someone was taking care of her for a change?

From Charlie’s point of view, what do you believe is his opinion of Edward before, then after the run-in with James, Victoria, and Laurent?

Did Stephanie Meyer's portrayal of Vampires appeal to you or do you prefer the more traditional view? (coffins, bats, etc)

Did this book change your view of vampires? If so, how? Is it a positive or negative change?

What is the significance of the Cover photo? (Forbidden Fruit.)

Why the title - Twilight? (The safest time of day for a Vampire.)(originally titled 'Forks')

Will you read the sequels? 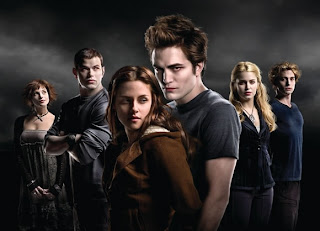 Topped Off By A Sleep In!

Surfer Boy is working on an oil tanker in Bass Strait somewhere, Moondoggie and Gidget are having a sleepover at their Grandparents..... gee, what shall I do with myself????
I worked at CHALK today and after closing I strolled up to the Bookshop for my weekly drool and came

away with The latest Jasper Fforde novel - First Among Sequels. I then popped into the cafe next door and spent a lovely hour drinking tea and re-reading the fabulous Twilight (see Bookgroup book). For me this is my idea of heaven - actually it could have been 28 degrees instead of 8 degrees but you can't have everything.

Next up is a trip to Blockbuster to choose tonights viewing, then take-away Thai and trackies on the couch with Krissa, the only other 40 year old who is excited that 'She's The Man' is on T.V. tonight! If you're a fan of cheesy teen movies, give this a go, if only for the incomparable comedic talent that is Amanda Bynes! (and yes, I'm serious.)(keep your eye out for the towel flick scene!! Priceless)
Enjoy your Saturday night - I certainly will!
P.S. - I think a hint is needed for the Challenge in the previous post!
3 blondes and a black cat
Posted by JK at 7:13 pm 4 comments: 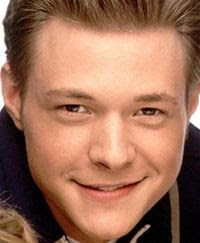 This is my favourite ABBA song - What's yours??

Drop In And Visit 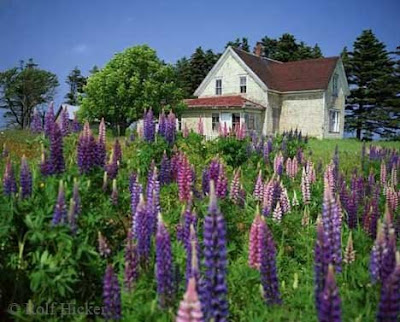 I am re-reading My Anne Of Green Gables series at the moment so my home this week is on the delightful Prince Edward Island in Canada, where Anne called home. It is the only part of the world that I'll be disappointed if I die without seeing.

And while I'm at it I wanted to share my favourite photo of Anne from the fabulous mini-series starring Megan Follows. 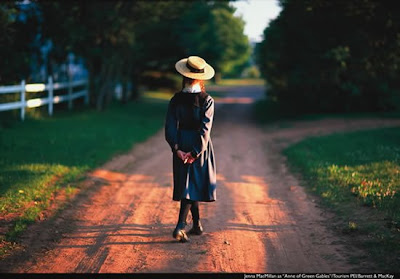 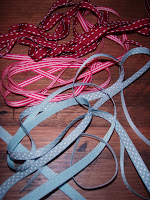 I was clearing out the stockroom at CHALK on the weekend and came across a bag of my grosgrain ribbon. I thought I might parcel up 2 meters of each (6 meters) and send them off to a couple of my readers. So leave me a comment and I'll choose 2 or 3 out of a hat to send some gorgeous grosgrain.
Posted by JK at 6:53 pm 12 comments:

I Could Do This Everyday.. 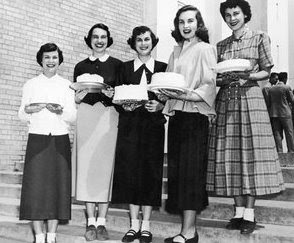 Childhood on a Stick 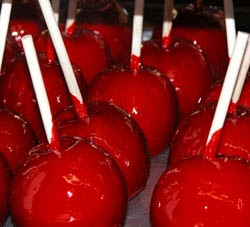 They are just as delicious as I remembered and taste like youth and sun and carousels and ponies and salty skin and scraped knees.
They also stick to your teeth and make you feel faintly guilty for doing something so decadent.
Have you seen anyone walking down the street eating a toffee apple lately? I think they, sadly, have been relegated to something you eat at home in secret.... I'm going to make next Saturday
TOFFEE APPLE DAY.
Help me bring back the joy!
Pop a Toffee Apple picture in your sidebar and join me.
Posted by JK at 9:47 am No comments:

Now I Want To Go To Italy 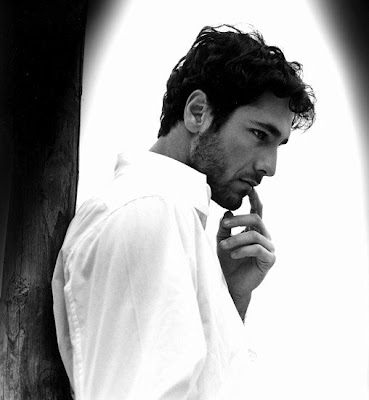 I really shouldn't blog late at night after watching a gorgeous Italian steam up the screen. I'm likely to turn the whole site into an ode to Raoul Bova!
I'd be happy to lie 'Under The Tuscan Sun' with Raoul, or even just gaze at him from afar.....sigh! Maybe we'd live here and have dozens of babies.... 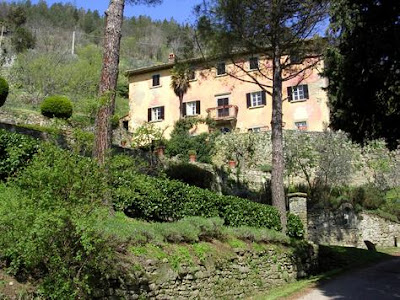 Maybe I should wake up now! Besides my husband is just as hot and I've already had babies with him so I'm way ahead of the game already. Kingsville is not quite Tuscany but 2 out of 3 isn't bad!
Good Night Raoul...
Posted by JK at 11:55 pm 3 comments:

Ever Get The Feeling....

'Everyone else my age is an adult, whereas I am merely in disguise.' 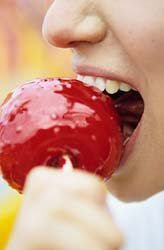 I am going to eat a Toffee Apple tomorrow!!!

The phone has rung hot this morning with friends checking to make sure I had heard the news about Keith. Luckily the lovely man, knowing I was waiting to hear, posted this on his website....

"Earlier this morning, Nic gave birth to our beautiful baby girl," he wrote. "We want to thank everybody that has kept us in their thoughts and prayers. We feel very blessed and grateful that we can share this joy with all of you today. More to follow..."

So she is finely here, safe and sound, and there is one more Urban in the world which can only be a very good thing for mankind!!! 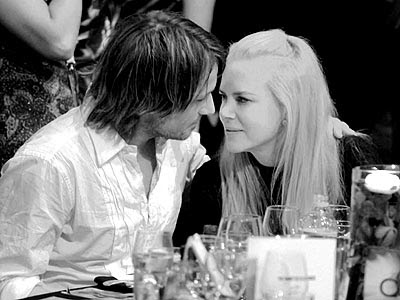 Congratulations to the Urban and Kidman Families.