We had an interesting start to the day yesterday. At 6.45am there was a knock on the door which woke me out of a deep sleep. I cursed the knocker under my breathe and stumbled to the door. When I asked who it was a lady responded - 'Next door is on fire you have to get out!' Well as you can imagine that woke me up pretty effectively.
The kids had woken when they heard the knock so we all pulled on our ugg boots and jumpers, I grabbed the phone, and we headed out of the house. Sure enough next door had smoke billowing out of the roof and things didn't look good. (That's my house on the right - the one down wind of the fire) 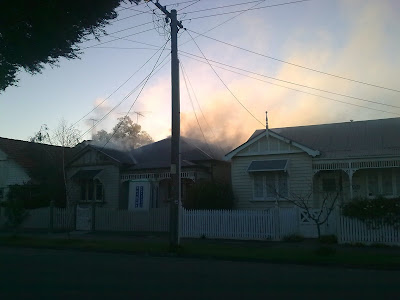 Someone must have called the fire brigade just before I did and they turned up within minutes of us leaving the house. As they arrived flames started shooting out of the top of the roof and the wind fanned the flames toward our house. I started to feel rather stressed as I watched the flames lick our roof. The hoses came out not a minute too soon as far as our house was concerned and the firemen immediately started hosing down our roof and the side of the house while they tried to enter the burning house.
5 fire engines, three police cars and a watching helicopter later and they had the fire under control and I felt confident enough to take the kids in to our lovely neighbours for a cuppa and a breakfast of chocolates (the kids thought that was just fantastic). We weren't allowed back into the house for a couple of hours but when they accompanied me back in we found that the water damage they had warned me of had not eventuated and apart from some toxic fumes and the stink of smoke, all was well at Castle Kiely. 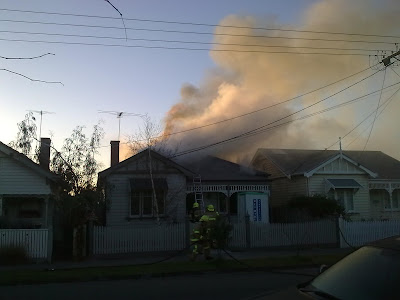 By lunchtime, Gidget was back at school and Moondoggie and I had a lovely view of fire trucks and firemen for most of the afternoon. By the way the burning house was in the final stages of a major renovation and the owners were not living there. Luckily no personal items were lost, just the annoyance of lengthy delays on their now not so renovated home. I'm not sure yet what the damage is but I would assume the inside is pretty much destroyed. Funnily enough, after all the drama the workmen nailed the roof back down and from the street you would not know anything had happened.

So.. a massive thank you to the mystery lady who happened to be taking a walk and warned us of the fire, and to the fabulous firemen who saved my house!

(By the way Surfer Boy had already left for work and missed all the drama - I called him to tell him what was happening and I don't think he quite believed it until he saw the photos.)

oh my !!! so thats what the helicopters were all about.....we heard the sirens etc but had no idea you were in such danger!! I would have slipped on my dressing gown (if i had one) and come to rescue you if only id known.glad no one was hurt.thank the lord for the walking lady!

What a way to wake up!!! fire is a pretty scary thing and moves so fast.Your poor neighbours ........ Just wondering where the photos of the firemen are????

How’s that fire. What a scare.

Let’s catch up in person. I’ll call you tomorrow to make a date.

PS that book you did for bookgroup looks good, as does the film version.