One Night With Zac

I thought it was time to tell you about our evening and share a couple of shots from our night with Zac - Our first glimpse was as we sauntered up the Red Carpet, trying to look cool and autograph worthy...
The yelling and screaming became sooo intense that we realised Zac was not far away. Sure enough he was furiously signing posters, posing with fans and generally making 100's of girls very happy. 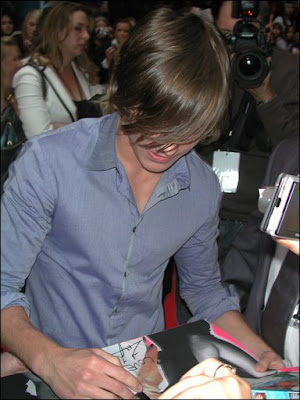 K. and I strolled past him and I am proud to say that we were both very well behaved and apart from a momentary double take and a couple of sneaky snaps, on we waltzed up the red carpet. 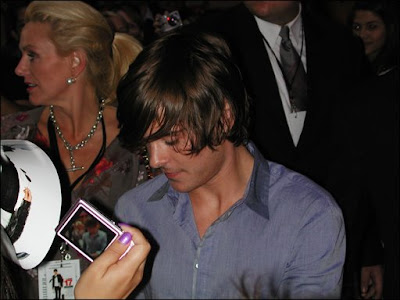 After our brief encounter we were giggling like school girls and entered the theatre hoping for good luck and great seats. As expected there were none at the front - we had been so spoilt at HSM3 and we thought our luck couldn't hold - until K. spotted an ex work colleague and our luck started looking up. This lovely man ushered us into the as yet unopened theatre where our 2 solitary front seats beckoned. With massive grins from ear to ear we staked out or turf and refused to be budged. We also happened to now be in the theatre with the reserved VIP seating so we had the added fun of watching everyone arrive. The Red Carpet was being shown on the screen so we gazed at Zac (and Brett Tucker) until he himself arrived in our theatre!!! 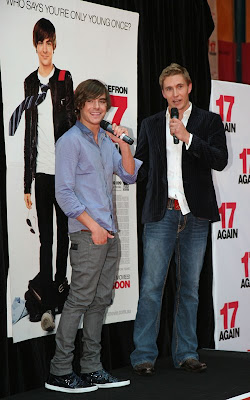 I will admit both K and I drew in our breath and I think we both held it for the entire time he was there. STUNNING. As K. mentioned he was literally 3 feet in front of us and he was charming, and personable (and hot!). By the time he left K. and I were a ridiculous mess but we managed to keep it together long enough to actually watch the movie which is apparently why we were there. The movie was great - great fun and lovely to see Matt Perry on our screens again.

By the movies end K. and I were pretty wrung out but there were more treats in store. On the way out of the theater we were given this - 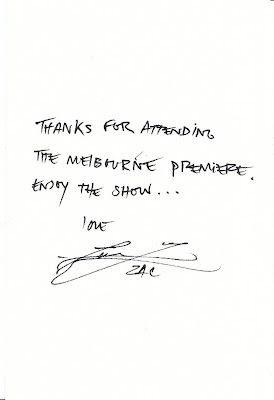 Of course K and I were the only ones to receive Zac's personal message (not) but it was a lovely touch anyway and kudos to Roadshow for making the whole evening very enjoyable. We all received loot with posters, magazines, popcorn and drinks all supplied by Roadshow!
The fun didn't stop there as we adjourned to a nearby restaurant to discuss the evening and Mr Brett Tucker also had the same idea. (see pic 3) Not only great pasta but great eye-candy too. Could 2 girls be any luckier?
Posted by JK at 10:16 pm

I'm laughing so hard at you! What kind of big wig are you that you are always at these red carpet events?

Sounds like you had an sbsolutely fabulous night! I'm slightly jealous!