This weekend Surfer Boy took the kids down to the beach house while I worked at the shop.
The kids have had a ball playing with their cousins and Surfer Boy has been competing in the Boardriders comp, while I have, of course, spent a lovely 2 days watching DVDs, having the girls over and generally feeling 10 years younger. That was until 10 minutes ago!

You may remember I posted about Moondoggie breaking his arm. We went and had the plaster removed the day before the holidays which was perfect timing, and after 6 weeks he has been relishing having the use of both arms again. 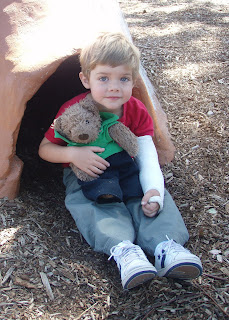 Surfer Boy has just rung me to say they are on their way home but... they have stopped off at Geelong Hospital because he thinks Moondoggie may have broken his arm again!!!!!

Pardon my language in advance but ...FUUUCK!!!

yes fully warranted , poor boy and poor you - it is such a hassle !