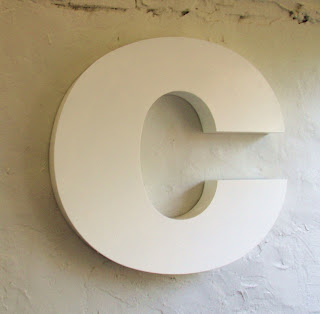 A couple of months ago Surfer Boy and I sold some industrial letters, that SB had salvaged, on ebay. A guy in Sydney bought them and sent a courier truck down to Melbourne to pick them up. All good. Another successful ebay transaction. (and in case you're interested, we sold them for about $80 each)
Today I was doing a bit of web surfing and came across a website for a shop in Sydney that sells industrial furniture, cool bric a brac etc. Imagine my surprise when I realised the industrial letters I was looking at were in fact the ones we had sold! Imagine my even greater surprise when I saw they were selling them for $500.00 each!!! Good on them - I hope they do well with them, - the part that REALLY surprised me was they way they were advertised. Our industrial letters from MELBOURNE, made in the late 80's to early 90's were described thus...

It pissed me off so much that they had blatantly bullshitted that I sent them a very polite email correcting the origins of the letters so that they could update their information!
I don't mind if they inflate the price, but I do mind if they lie about where they came from to make them sound more exotic. The other problem is I now don't trust any of their descriptions and wonder how many other supposedly vintage pieces are in fact made last year in some factory in Indo.
SPRUNG! (Wonder if they'll change them??)
Posted by JK at 8:04 pm

ooh, spill the beans Jen. Who are the cheaky buggers?

or should that be cheeky buggers. I had a wine at dinner.

if they don't change the listing you can contact ebay to let them know about a false/incorrectly listed item.

thanks anon' but they have listed it on their own shop website - not ebay.

Dodgy,dodgy,dodgy!!!! And by the way when we write Homemade it is Homemade just not by me!!! :-)

You are getting so fiesty in your old age....and I've softened!!! I love the dog in you! xa