Last night I was absolutely astonished at the amount of women who live in Yarraville and it's surrounds. There are hoards of them and apparently I am the only one of this multitude who did not watch Sex And The City devotedly! It honestly crossed my mind that if the movie didn't screen for some reason there would be a massive stampede of angry women through the streets of Yarraville and nothing would stand in their way. Luckily all went smoothly.

For a non-believer I found myself at the midnight pre-view of SITC on Monday night, and back again on Tuesday night for round 2!! Why? You may well ask.
My lovely friend Krissa works for the Sun Theater and invited me along to their pre-view screening and who am I to knock back a free movie and a girls night out? I figured that even if the movie was shit I would still have had a chance to catch up with Krissa and have a natter. Unfortunately I had already committed to seeing the movie with some of the Prep Mums from Gidget's school and really didn't want to back out of that either. Once again I decided that a chat and a cuppa with a lovely group of girls far outweighed the possibility of sitting through SITC twice in the space of 24 hours.

I was never a fan of the show - I didn't dislike it, I just didn't love it.
I figured that I knew enough about the girls and their history to not hate the movie so off I trotted feeling slightly guilty that someone as ambivalent as myself was getting to see the movie before so many die-hard Carrie fans.
Imagine my surprise when not only did I not hate it - I actually really enjoyed it!!!
I even enjoyed it just as much the second time!!

So the moral of this tale is this - even if you weren't a Sex In The City fan, the movie stands alone as a great chick flick with a lot of depth and heart. It is well worth the hype from a script point of view and engendered much interesting discussion over a few Cosmopolitans afterwards. 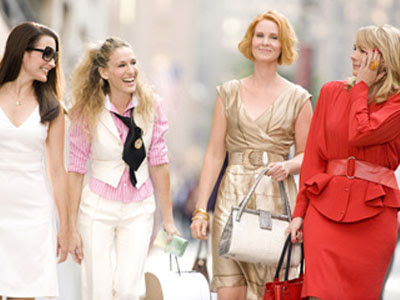 don't worry...not every woman in Yarraville & surrounds was out to see Sex and the City...I'll go see it..maybe next week, or the week after. Now here's something that I went to see today: Narnia-Prince Caspian....totally awesome! (and he's cute, although waaaay too young) 10x better than SITC I reckon ;) Glad you had fun though, now I know I'm just going to enjoy a girls night out too ;)

I blogged about this too :) I wasn't a massive fan either but thoroughly enjoyed it! Many women I know weren't fans but trotted along and fell in love with the movie! lol were we all sucked in by the publicity?