I do, I hate cooking. I think if it wasn't compulsory I wouldn't hate it so much. It's a little like those novels you had to read at school. No matter how fabulous they were you always hated them just for the sin of being compulsory. Take Wuthering Heights for example. I knew deep down that it was a book worthy of my love but thanks to Year 11 Lit it took another 10 years for me to acknowledge the love.

I digress...
Cooking - Yuk. Something that I do because my family would slowly wither away if I didn't. On the odd occassion that I get enthused it is usually in someone elses immaculate, modern kitchen not my own pre 1930s disaster.
Therefore I was rather surprised yesterday when the cooking bug struck. Not only were the conditions far from optimal, it was 36 degrees celcius (97 f) outside which means it must have topped 40 in my windowless hot box, and did I also mention I hate cooking? Undaunted I somehow managed to produce a rather yummy Javanese curry ('cause curry is so good on a hot night) and a jammy, coconut slice that will grace the lunchboxes of Moondoggie and Gidget for the next month!

It wasn't until I washed up the last dish (did I mention we don't have a dishwasher?) and stowed away the tupperware that I thought - 'What the F_CK am I doing - it's stinking hot and I hate cooking.' I figured the heat must have adversely affected me causing weird domestic tasks to be undertaken - Surfer Boy is hoping it happens again real soon.
Here are the fruits of my labour because I sure as hell won't be a domestic goddess again in the foreseeable future so I thought I'd better capture it on film to show the kids when they are older, or the Department of Human Services. 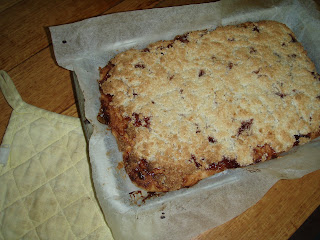 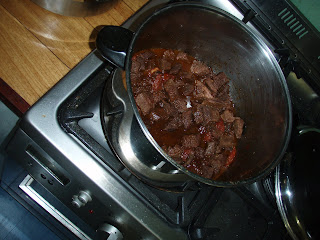 And this is what they were supposed to look like.. 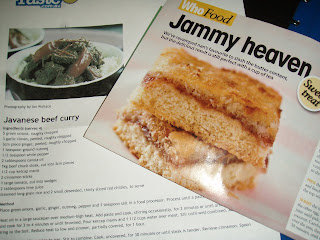 I was wondering what has distracted you from your Blog,emailing or txt and now I know!!! But your mistake has been admitting you CAN cook others will expect more of this miracle but not those who attend Gilmore Girls nights we prefer take away!!!

lol i hate cooking too - because it's a chore that has to be done almost every night ...and when you have kids it's kind of compulsory lol

every now and again i have a moment like you have experienced but most nights it's a dreaded task...and deciding WHAT to cook is even worse!

Good to see you're living up to your nickname "Jam Sandwich" and indulging in some jammy heaven.

that was such a funny post...I loved it!..My dream is to have a chef...because I love food,I just dont want to prepare it or clean up the mess afterwards.

Definitely in the hate cooking camp too. ESPECIALLY on hot days.

I hate cooking too. I go through phases of sudden activity, then revert to throwing stuff together at the last minute.